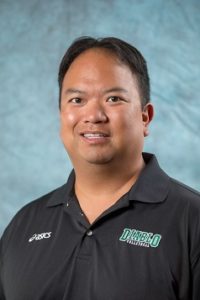 Where have the years gone?! It really doesnt’ seem to me that I have been coaching volleyball for a very long time. It wasn’t until Teresa and Sean asked me to come up with a one page summary of who I am, that I realized just how long it actually has been. Many of the years of coaching that I have listed were spent as a co-coach with my brother Kevin. While we both have coached on our own in the past, we feel together we make agreat coaching team and our players get the most out of volleyball.I was primarily a high school volleyball coach until one fateful day: I emailed Teresa to see about putting together a club team comprised of my high school students. Five years later and 11 teams later, I feel I definitely made the right choice to come work for Diablo Valley VBC. I certainly appreciate how easy Sean and Teresa make for me to be a coach and not an administrator.

As a coach I beleive in hard work. Through club volleyball you will improve. I beleive in commitment and dedication. I see myself not only as teacher of the game, but also a teacher of life. Players will learn what it means to be on a team and to work towards a common goal. I try to keep myself connected and involved with the players to help avoid “drama”. I believe in communication. For if there is clear communication with the players and parents, most problems are avoided. Finally, I beleive in sacrifice. Each person involved with the team, me included, has to make decisions and sacrifices for the team. We are all working towards becoming better on and off the volleyball court.